Meditation begins to gain more ground in the world. However, it reflects a Rebellious attitude when the idea “Meditation is fun’ is yours. 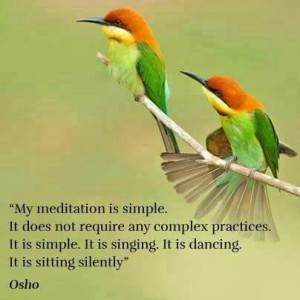 Meditation is still conceived as a fairly serious event. The eyes are closed and the focus turns inward. It is not something rather common that exists in a world which mostly looks outside. Not only people mainly look  outside. They additionally are mostly focused on what others are doing and what others think of their behavior.

The Rebellious Attitude of Osho in the Creation of his Meditations

So we reached to the statement that “Meditation is fun.” If your meditation will be an integral part of your life, it becomes fun. It is also true that meditation deepens the feeling of fun. You are inclined to think that meditation specially is meant to discharge you from your stress and to help you if you can not get going. Both facts are correct indeed. But just when you feel good, meditation is also important. At that moment you can anchor the feeling of pleasure much deeper into yourself. It becomes a place within yourself which you will increasingly easy connect with. The fun then will spread even more al over you and over your life. Therefore ‘meditation is fun’ reflects a Rebellious attitude. It is totally opposite to what is still accepted as meditation. Meanwhile, also ‘meditation is fun’ is supported by research findings.

About Osho’s meditations you can read the following book, which will include the description of the meditations themselves too.

Meditation, the First and the Last Freedom